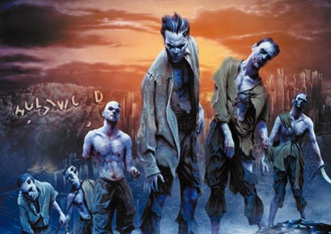 Zombies are a huge "pop-culture" symbol nowadays, there are countless shows about Zombies, such as The Walking Dead, Dead Set, and Death Valley. I have never had an interest in anything zombie-related, however apparently not only do people love watching these types of shows and movies, some also think a zombie-apocalypse could realistically happen. While this seems absurd to me, and I don't know anyone illogical enough to buy into that idea, I can't deny this existence of believers. This just goes to show the ridiculous and absurd ideas that movies and TV can plant into the minds of viewers. If there weren't so many media sources regarding zombies, no one would even know what a zombie is, and no one would have any sort of fear of the world being taken over by the living dead. Movies implant an irrational sort of fear in the minds of viewers. Just a few of the hundreds of zombie movies there are:
start at 1:36 Dead Snow